I bought myself a new monitor and new new video card to push it.  This monitor will join my two 24 inch Sansungs on my main machine.  I planned to use the new video card to push the new HP monitor and use an old 9800 GT to push the two Samsungs.  I was a little worried about mixing the ATI card with the Nvidia card but a little research on the internet put me at ease.  I read that Vista cannot use two video drivers but Windows 7 can…  My card arrived I downloaded the latest drivers and tried to install them.  The installation program did not work!! I ran it a number of times with the same result,  the installation would just stop.  No error, it would just stop.  I was sick!   I checked the event log and found this. 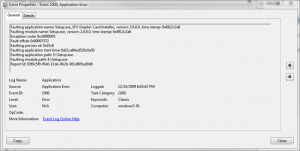 Not much help.  I did some digging on the internet and found a post on forums.amd.com that helped.  I found out that because I am running a 64 bit OS I need to install the drivers from the command line.

The command line installation did the trick!  Why did ATI do this?  If they are going to release an installation program that does not work on a 64 bit OS some instructions in the box would be good.